Faithful readers may recall that on April 14, when we celebrated the anniversary of the beatification of Pauline von Mallinckrodt, we referred to the homily of Pope John Paul II during the beatification liturgy in 1985.  Several of you expressed interest in reading the entire homily.

We thought that today, when the Church observes the Feast of Blessed Pauline (1817-1881), it would be appropriate to share an English translation of the homily.  Through the wonders of technology and the kindness of Sister Adalberta in Germany, we are able to share the text, which appeared in an article in the May 13, 1985 issue of L'Osservatore Romano. Click here to access the article.

Here are some excerpts of the Holy Father's homily:


"The spiritual message of the new Blessed, Pauline von Mallinckrodt, can be summed up in a very relevant and concrete philosophy of life: to follow Christ unreservedly in unshakable faith; to love God and lovingly to dedicate oneself to the most lowly and poor, for the sake of Christ.
. . .
Hers was a conscious and courageous faith.  It allowed her to endure pain, bitterness and many trials, and it showed itself in her complete and unreserved love for Jesus Christ and his Mother Mary.  Full of confidence and trust she left herself in their hands.  Striving for God and his greater glory she grew in grace, for she constantly drew strength from prayer in the context of a profound eucharistic life.
. . .
Her plans were daring; but she knew how to wait in quiet and humble restraint for the time which God would choose.  Her work grew successful, though only amid continual struggles and difficulties.  The time of its greatest growth also saw the coming of a destructive storm, persecution under the laws of the Kulturkampf.  But here too Mother Pauline showed her interior openness to the will of God and was ready and able to encounter trials, and make her Way of the Cross.

The life of Mother Pauline is an example to us.  In answer to the anxious unrest of modern man she shows us a way to inner peace: by courageously and trustingly seeing God in one’s suffering brother and sister.  Thus her message has relevance today too, for the search for God is always relevant."

Blessed Pauline, we pray to you:  Lead us to God!

Posted by SCC JPIC Blog at 3:18 AM No comments:

For your May Calendar

Here are some dates you might want to remember during May:

Click here to access resources for the 48th anniversary of Earth Day (today) from Catholic Climate Covenant.  Resources are also available here from the Catholic Health Association of the United States, where you will find a prayer from St. Basil the Great:

Oh God, enlarge within us the sense of fellowship with all living things; with our brothers the animals to whom you gave the earth as their home in common with us.  We remember with shame that in the past we have exercised the high domain of  humans with ruthless cruelty so that the voice of the earth, which should have gone up to you in song, has been a groan of travail.  May we realize that they live not for us alone, but for themselves, and for you, and that they love the sweetness of life.  Amen.
Posted by SCC JPIC Blog at 8:17 PM No comments:

On April 14, 1985 in Rome, Mother Pauline von Mallinckrodt was beatified by Pope John Paul II.  In his homily during Blessed Pauline's beatification, the Holy Father made special note of her love of God and of the poor and of her kindness, trust, faithfulness and self-sacrifice.  He also mentioned Blessed Pauline's exercise of humility and patience amidst her bold (some translators would say "audacious") plans, which were carried out among struggles and difficulties.  In the conclusion of his remarks about Blessed Pauline, Pope John Paul II noted that her message is always current: To courageously and trustingly seek God in our suffering brothers and sisters.

Today, as we celebrate the anniversary of the beatification of our Foundress, we pray that we may continue to follow her example:  Blessed Pauline, we pray to you:  Lead us to God! 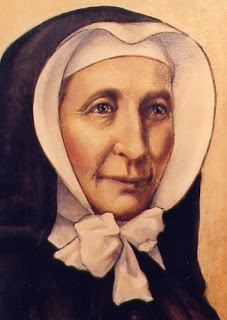 As we reminded you last week, the new Apostolic Exhortation, Gaudete et Exsultate (Rejoice and Be Glad:  On the Call to Holiness in Today's World) was released today at noon (Rome time).  It is available here.  Pope Francis explains that his goal in Gaudete et Exsultate is to "repropose the call to holiness in a practical way for our own time, with all its risks, challenges and opportunities.  For the Lord has chosen each one of us 'to be holy and blameless before him in love'" (Eph 1:4) (n. 2).

If you are short on time to read the exhortation, America Magazine has provided "Top Five Takeaways from Pope Francis' Gaudete et Exsultate" (available here).  The "takeaways" are a good introduction, but they are not a substitute for reading the words of Pope Francis.

Posted by SCC JPIC Blog at 9:20 AM No comments:

Rejoice and be glad

According to this press release from the Vatican Press Office, Pope Francis' newest Apostolic Exhortation, Gaudete et Exsultate ("Rejoice and Be Glad: On the Call to Holiness in the Contemporary World"), will be released on Monday, April 9.  Click here for more information from Vatican News.
Posted by SCC JPIC Blog at 11:52 AM No comments:

The April issue of the Stop Trafficking newsletter is available here.
Posted by SCC JPIC Blog at 5:05 PM No comments: