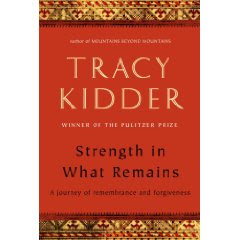 Strength in What Remains is a new book by Tracy Kidder (author of Mountains Beyond Mountains). According to Tracy Kidder on Amazon.com: Strength in What Remains is the story of Deogratias, a young man from the central African nation of Burundi. In 1993, through no fault of his own, he was forced onto a terrifying journey, a journey that split his life in two. First he made a six-months-long escape, on foot, from ethnic violence in Burundi and from genocide in Rwanda. Then, in a strange twist of fate, he was, as it were, transported to New York City, where it sometimes seemed that his travails had only just begun.
I met Deo by chance 6 years ago. When I first heard his story, I had one simple thought: I would not have survived. I hoped in part to reproduce that feeling as I retold his story. I also hoped to humanize what, to most westerners anyway, is a mysterious, little-known part of the world. We hear about mass slaughter in distant countries and we imagine that murder and mayhem define those locales. Deo’s story opens up one of those places into a comprehensible landscape—and also opens up a part of New York that is designed to be invisible, the service entrances of the upper East Side, the camping sites that homeless people use in Central Park. But above all, I think, this is a book about coming to terms with memories. How can a person deal with memories like Deo’s, tormenting memories, memories with a distinctly ungovernable quality?
In the first part of Strength In What Remains, I recount Deo’s story. In the second part, I tell about going back with him to the stations of his life, in New York and Burundi. So the story that I tell isn’t only about the memories that Deo related to me. It’s also about seeing him overtaken by memories—again and again, and sometimes acutely. But Deo didn’t take me to Burundi just to show me around. Giving me a tour of his past was incidental to what he was up to in the present and the future. His story has a denoument that even now amazes me.
Deo is an American citizen. He doesn’t have to go back to Burundi. But he has returned continually and keeps on returning, and, amid the postwar wreckage, with the help of friends and family, he has created a clinic and public health system, free to those who can’t pay, in a rural village—part of a beginning, Deo dreams, of a new Burundi.
This facility was a pile of rocks when I visited the site in the summer of 2006. By the fall of 2008, it had become a medical center with several new buildings, a trained professional staff, and a fully stocked pharmacy. In its first year of operation it treated 21,000 different patients. (The organization that Deo founded and that sponsors and operates this facility is called Village Health Works.)
Deo was very young when he went through his long travail. Several strangers helped to save him from death and despair in Burundi and New York. So did sheer courage and pluck, and also Columbia University, which he attended as an undergraduate. But when it’s come to dealing with the burden of his memories, the public health system and clinic that he founded has been the nearest thing to a solution. In the end, it’s neither forgetting the past nor dwelling on the past that has worked for him. For him the answer has been remembering and acting. I once asked Deo why he had studied philosophy at Columbia. He told me, "I wanted to understand what had happened to me." In the end, he received what most students of philosophy receive—not answers, but more questions. As I was trying to describe his effort to build a clinic, I found myself writing: "Deo had discovered a way to quiet the questions he’d been asking at Columbia. That is, he saw there might be an answer for what troubled him most about the world, an answer that lay in his hands, indeed in his memory. You had to do something."—Tracy Kidder
Posted by SCC JPIC Blog at 7:46 AM No comments:

Don't miss today's NY Times Magazine, dedicated to "saving the world's women." You will find articles on the oppression of women worldwide, philanthropy among women, "the daughter deficit" in India and China, and much more. Click here to go to the online version of the magazine. Click here to see Nicholas Kristoff's audio slideshow, "A Powerful Truth," about how educating girls and empowering women can fight poverty and extremis.
Posted by SCC JPIC Blog at 10:52 AM 1 comment: