Flooding in the Philippines

Currently, the death toll from typhoon Ondoy (Ketsana) in the Philippines stands at 240. Click here for a YouTube video (not in English, but the pictures speak for themselves). Let's continue to pray f0r all those affected by this tragedy.
Posted by SCC JPIC Blog at 7:27 AM No comments:

You may already be aware that that Second Special Assembly for Africa of the Synod of Bishops will take place in Rome from October 4 to 25, 2009. The Catholic Task Force on Africa, a Washington, DC-based group of advocates maintains a website, "Yes, Africa Matters," that will fill you in on the synod. Click here to access the Instrumentum Laboris for the synod. Because of our close contact with students from African nations, Africa has more of a personal meaning for us. We can put a face with Africa more than ever before. Let us keep the synod in our prayers. Let us also try to inform as many others as we can.
Posted by SCC JPIC Blog at 12:07 AM No comments:

Last week, Catholic Charities USA released its 2008 Annual Survey--an extensive compilation of front-line data that comes on the heels of the U.S. Census Bureau numbers and painfully though not surprisingly further documents increasing levels of poverty.

The number of clients served by Catholic Charities in 2008 jumped by 10.2 percent, moving from approximately 8 million to 8.5 million, substantially reversing the reduction in poverty trends and levels that the Annual Survey positively revealed in the middle of the decade. Additionally, Catholic Charities' agencies reported providing:

Overall, trend lines for services most in demand in 2008 tracked with the eroding economy. In a webinar on September 15th, Rev. Larry Snyder, President and CEO of Catholic Charities USA, presented the results of the survey to the Catholic Charities USA network. To view the webinar, please click here. A summary of the 2008 Annual Survey and the full report are available by visiting the following link.
Posted by SCC JPIC Blog at 12:22 AM No comments:

Bishop William Murphy, chairman of Domestic Justice and Human Development for the U.S. bishops, addresses the urgent need for health care reform that is available to everyone and protects the life and dignity of every person. Click here to go to the USCCB website and view Bishop Murphy's video.
Posted by SCC JPIC Blog at 12:16 AM No comments:

Rocco Palmo ("Whispers in the Loggia") has provided some information about Archbishop Raymond Burke's comments on the Baucus health care plan. He also includes links to comments made by Cardinal Renato Martino. Click here to go to Rocco's blog.
Posted by SCC JPIC Blog at 6:50 AM No comments:

This comes as a reminder that the Justice for Immigrants campaign of the USCCB will hold a regional convening on immigration reform October 7-9, 2009 at the Malvern Retreat House outside Philadelphia. For information, agenda, and registration please see www.justiceforimmigrants.org .
Posted by SCC JPIC Blog at 10:48 PM No comments:

The United Nations' International Day of Peace is marked every year on September 21. An Evening Prayer was e-mailed to SCCs. Assumption College for Sisters in Mendham is having its traditional prayer service at 11:45 on that day. Leave us comments on the blog to indicate how you will celebrate the International Day of Peace. (That is, if you are an e-mail subscriber and want to comment, you have to go to the blog first -- link at bottom of page.)

Additionally, the Culture of Peace Initiative will host its first-ever 24-hour Global Broadcast on Peace Day!
Posted by SCC JPIC Blog at 10:37 AM No comments:

The Coalition on Human Needs held a very informative webinar on September 14 -- "What the New Census Data Tell Us About Poverty in America and What the Faith Community Can Do About It." The webinar is available here and is full of practical, hands on information regarding the census and suggestions on what the faith community can do to tackle poverty in America.
Posted by SCC JPIC Blog at 10:31 PM No comments:

The Healing of America 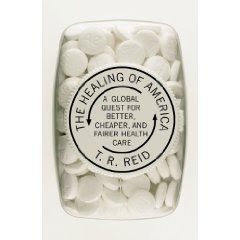 The Healing of America: A Global Quest for Better, Cheaper, and Fairer Health Care, by former Washington Post bureau chief, T.R. Reid, operates from an interesting premise. Reid presents himself and his symptoms (chronic shoulder pain) to physicians in the U.S., England, Japan, Germany, France, and India to see how treatment options would differ. However, Reid uses this experience to study how other industrialized countries are able to provide universal health care at a reasonable cost. From the product description on Amazon.com: In his global quest to find a possible prescription, Reid visits wealthy, free market, industrialized democracies like our own-including France, Germany, Japan, the U.K., and Canada-where he finds inspiration in example. Reid shares evidence from doctors, government officials, health care experts, and patients the world over, finding that foreign health care systems give everybody quality care at an affordable cost. And that dreaded monster "socialized medicine" turns out to be a myth. Many developed countries provide universal coverage with private doctors, private hospitals, and private insurance. In addition to long-established systems, Reid also studies countries that have carried out major health care reform. The first question facing these countries-and the United States, for that matter-is an ethical issue: Is health care a human right? Most countries have already answered with a resolute yes, leaving the United States in the murky moral backwater with nations we typically think of as far less just than our own. The Healing of America lays bare the moral question at the heart of our troubled system, dissecting the misleading rhetoric surrounding the health care debate. Reid sees problems elsewhere, too: He finds poorly paid doctors in Japan, endless lines in Canada, mistreated patients in Britain, spartan facilities in France. Still, all the other rich countries operate at a lower cost, produce better health statistics, and cover everybody. In the end, The Healing of America is a good news book: It finds models around the world that Americans can borrow to guarantee health care for everybody who needs it.

Health Care Reform: A Note from the LCWR

Now that President Obama has delivered a strong speech to congress and the U.S. American people, it is critical that citizens, particularly people of faith, take action NOW even though many of us have been doing so during the August recess. The LCWR leadership issued a statement following the annual assembly. It is based on principles called for by the USCCB and CHA. The president of the UnitedStates has called for action. As you know, however, there are voices in the Senate which continue to resist meaningful health care reform. NETWORK urges calls to senators this week with the message that quality health care is a basic human right and it is incumbent on the Senate to support a health care reform bill that provides quality health care coverage for everyone at a cost that is affordable for everyone. If you listened to the president's speech last Wednesday, you heard him also affirm that health care for all is a moral imperative. Call senators inWashington via a toll-free number: 1-888-797-8717 (thanks to the UnitedChurch of Christ Justice and Witness Ministries and the General Board ofChurch and Society of the United Methodist Church.)
Posted by SCC JPIC Blog at 10:58 PM No comments:

Last week, Members of Congress resumed debate on health care overhaul after a series of contentious town hall meetings throughout the August recess. Senator Max Baucus (D-MT), Chairman of the Senate Finance Committee, released a draft outlining his framework for health care reform . This outline does not propose a government funded public option. Instead, it would establish health care cooperatives, a system of nonprofit, member-run health insurance companies. Baucus' framework calls for an expansion of Medicaid to cover all people under 133 percent of the federal poverty level.

President Obama also outlined his vision for health care reform in a joint session of Congress on September 9. Many of the Obama Administration proposals are reflected in the Finance Committee framework. Insurers would be forbidden from refusing coverage to individuals with pre-existing conditions or dropping coverage if an individual becomes ill. Both plans would mandate individual coverage and encourage businesses to offer coverage to their employees while providing some protections to small businesses. President Obama also called for a total cost of about $900 billion over 10 years, matching the estimated cost for the Finance Committee version.

The other four committees of jurisdiction (Senate Health, Education, Labor and Pensions Committee; House Ways and Means, Education and Labor, and Energy and Commerce Committees) completed markups before the August recess. While Senator Baucus has stressed bipartisanship throughout the process, he now says that he will advance his proposal during the week of the 21st with or without Republican support. Legislative language is expected to be released this week.
Posted by SCC JPIC Blog at 10:53 PM No comments:

Poverty on the Rise

On September 10, the U.S. Census Bureau released new data on poverty and insurance coverage in the United States. The new data shows that in 2008, the number of Americans living in poverty increased by nearly 2.6 million to 39.8 million (13.2 percent). The poverty rate increased for children under age 18 to 19 percent in 2008, up from 18 percent in 2007. Real median household income in the United States fell 3.6 percent between 2007 and 2008, from $52,163 to $50,303. This breaks three years of annual income increases and coincides with the recession that started in December 2007.

The number of uninsured individuals rose to 46.3 million, an increase of 600,000 from 2007. The number of people covered by private health insurance decreased from 202 to 201 million, while the number covered by government health insurance climbed from 83 million to 87 million. The number of individuals covered by employment-based health insurance declined from 177 million to 176 million. One positive sign in the new data is that the number of uninsured children declined from 8 million in 2007 to 7 million in 2008.
The 39.8 million individuals living in poverty in 2008 represents the highest number since 1960. While the new poverty statistics released by the Census Bureau reveal the number of people who were living in poverty through 2008, it does not tell the true picture of economic hardship being faced by the millions of workers who have lost their jobs in the eight months of 2009.
Posted by SCC JPIC Blog at 10:50 PM No comments:

Gandhi's birthday, October 2, has been designated by the United Nations as International Day of Nonviolence. The USG/UISG JPIC Commission in Rome has provided this prayer service (available in 16 languages) to mark this day. Feel free to share it widely! Thanks to Sister DeSales for alerting us to this prayer service.
Posted by SCC JPIC Blog at 12:12 AM No comments:

A Site Worth Exploring

The Pennsylvania Catholic Conference (PCC) maintains a very informative website on public policy, covering everything from Catholic education to health care to faith and politics. It's worth reading, even for those beyond the boundaries of PA, especially as the health care reform debate heats up. Click here to go to the PCC website.
Posted by SCC JPIC Blog at 10:46 PM 1 comment:

The Bishops on Health Care Reform

Go to the USCCB website's health care reform page and read what the Bishops of the US have to say about health care reform. Be sure to scroll down to get all the resources on this page!
Posted by SCC JPIC Blog at 3:59 AM No comments:

Let us continue to pray for peace on earth!

Let's begin our conversation on health care reform by reading the actual plan outlined by President Obama in his speech on Wednesday evening. Click here to access the White House website's text of the plan. If you scroll down on that page, you can receive the text of his remarks (or excerpts if you are in a hurry). The letter that Senator Kennedy sent to the President is also available on this page.
Posted by SCC JPIC Blog at 5:51 AM No comments: