More photos from the SOA/WHINSEC

Check out the SCC Generalate website for more pictures of our Sisters at Fort Benning. The link takes you to the JPIC page. Scroll down for the pictures.
Posted by SCC JPIC Blog at 12:55 AM No comments: 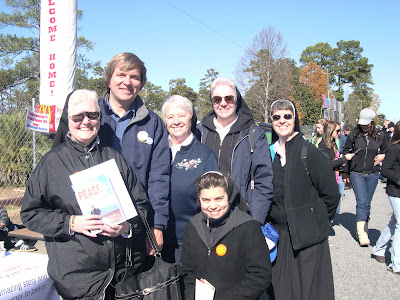 For those protesting at Fort Benning today: O God, send us forth as your witnesses. Help us to testify to who you are in this moment in our history. Help us to take up the cause of the poor, the rejected, the outcast, the oppressed and violated as our own. Let us not fear what is asked of us, but rather fear infidelity to your word. Make us prophets to our world. Amen.
-Prayer service available at: http://www.archmil.org/news/userfiles/prayer.doc
Posted by SCC JPIC Blog at 12:21 AM No comments:

Stay informed about the Freedom of Choice Act (FOCA):

Click here for the "Fight FOCA" website, which includes an opportunity to sign the petition, which will be sent to members of Congress and President-Elect Obama.

FOCA is purported to guarantee "reproductive freedom" for American women by eradicating the restrictions and regulations placed on abortion over the years since the passage of Roe v. Wade. Additionally, it would have far-reaching implications on the ability of Catholic healthcare and social services to refrain from offering services contrarty to Catholic morality.

According to Cardinal George, president of the USCCB:
"FOCA would have an equally destructive effect on the freedom of conscience of doctors, nurses and health care workers whose personal convictions do not permit them to cooperate in the private killing of unborn children. It would threaten Catholic health care institutions and Catholic Charities. It would be an evil law that would further divide our country, and the Church should be intent on opposing evil … Abortion kills not only unborn children; it destroys constitutional order and the common good, which is assured only when the life of every human being is legally protected. Aggressively pro-abortion policies, legislation and executive orders will permanently alienate tens of millions of Americans, and would be seen by many as an attack on the free exercise of their religion.'"
Posted by SCC JPIC Blog at 12:36 AM No comments:

Prayer for our Sisters who head out to Fort Benning next week: We gather this day, O God to remember and celebrate that you are a God of Liberation and justice. As Creator, we know you to be one who rejoices with us in the beauty and bounty of all creation; as Redeemer, we trust you to be one who weeps with us over the violence of human suffering; and, as Sustainer, we understand you to be one who is angered with us at human indifference. Weave your power and presence into our hearts and minds this day as we struggle to be a people who comfort your human family with celebrations, tears, and action. Amen.
- Prayer service availabe at http://www.archmil.org/news/userfiles/prayer.doc

To Sisters Elizabeth, Mary Irene, Janice Boyer, Juliana, and Monica: We are with you in Spirit!
Posted by SCC JPIC Blog at 12:24 AM No comments:

Thanks to Sister Joseph for alerting us to this:

Jubilee Sunday annually provides an opportunity for communities of faith to hold a Sunday service focused on the principles of Jubilee. Join Jubilee Congregations around the United States in dedicating part or all of your time together to pray for global economic justice, deepen the communities understanding of the debt issue, take concrete action for debt cancellation for all impoverished countries, and receive a special offering to support the work of the Jubilee USA Network. Click here for more information and liturgy resources on Jubilee Sunday, December 14.

Another reminder will be posted closer to December 14, but it might be good to check out the resources now.
Posted by SCC JPIC Blog at 12:33 AM 1 comment:

International Day for Abolition of Slavery

Thanks to Sister Joann Marie for sending this our way:

The United Nations established the International Day for Abolition of Slavery in 1949. This day, observed on December 2 each year, was established as a means of commemorating efforts to abolish all forms of slavery throughout the world. We know that there are millions of people living in a state of servitude in all corners of the world today - most of whom are women and children.

The Frederick Douglass Family Foundation (FDFF) is pooling efforts among those who work against slavery today. Click here to sign up to receive e-mail updates about the work of FDFF toward observing December 2 this year.
Posted by SCC JPIC Blog at 12:23 AM 1 comment:

Go to the SOA Watch web site to sign the petition asking President-Elect Barack Obama to issue an Executive Order to close the SOA. You can sign the petition online or print a form to get others to sign with you. Remember to keep the vigil in your prayers.
Posted by SCC JPIC Blog at 12:42 AM No comments:

First, I want to express my gratitude to Lisa for filling in as my "guest blogger" during my retreat. She did a great job of keeping everyone posted on the Troy Davis case -- more to follow in the days to come.

As we move on, the violence against Christians in India grabs our attention. The LCWR has sent information and an action alert. First, the information:

Since August 23, following the murder of Vishwa HinduParishad leader Swami Lakshmanananda Saraswati and four of his associates, reportedly by Maoist groups in the state of Orissa, Christians have been under siege. Christian leadership has unequivocally condemned the killings and sympathized with the bereaved family members and spoken out against all violence. However, the government of Orissa has allowed some fascist and fundamentalist forces to terrorize the poor and minorities of the State. Churches and houses in Christian communities have been destroyed, shops burned, nuns raped, and many Christians have fled to the jungles for survival. Hindu radicals have targeted relief camps to shelter harassed Christians. By September 20, there were 45 killings, 4,000 destroyed homes and 56 churches, 11 schools, and 4 NGO offices destroyed, 18,000 wounded and attacks on 300 villages. Recently, a Catholic priest in Delhi wrote a letter to friends in the U.S. describing a procession on October 2 to the tomb of Mahatma Gandhi, apostle of nonviolence, led by theArchbishop of Delhi, to express solidarity with persecuted brothers and sisters in Orissa and to protest the ethnic cleansing of Christians. He also referred to a report that documents links between the India Development and Relief Fund (IDRF), a Maryland- based charity, and certain violent and sectarian Hindu supremacist organizations in India seeking to create a Hindu Rashtra (an ethnically "pure" Hindu Nation). Increased awareness and prayers are requested on our part.
Posted by SCC JPIC Blog at 12:48 AM No comments:

On Sunday, November 9, 2008, human rights activists will march on the United States Southern Command (U.S. SOUTHCOM) Headquarters of the US military. They will demand an end to the training of terrorists and torturers in the U.S. & the direction of SOA “graduates” by the U.S. Southern Command. SOUTHCOM is located in Doral, Florida. It is responsible for all U.S. military activities in South America and Central America (including Guantanamo). Click here for more information.
Posted by SCC JPIC Blog at 12:09 AM No comments:

We pray in a special way today for the Presidential Election. Whatever you do, don't forget to vote and pray, pray and vote! (What a time to be in retreat! Luckily, I voted as an absentee back in October!)
Posted by SCC JPIC Blog at 12:34 AM No comments:

On Friday, October 24, 2008, a federal appeals court temporarily stopped the execution of Georgia deathrow inmate Troy Anthony Davis who was scheduled to be put to death by lethal injection.
The federal appeals court order marks the third time a stay of execution has been issued in this case, an unusual occurrence according to most legal experts. While each stay offers the hope that justice will be served, each stay so far has been followed by another legal setback and has put Davis another step closer to obtaining a new trial and proving his innocence.
This stay has been issued pending Davis' attorney's ability to prove to the Court that no jury today would have found him guilty based on the evidence available including the recanted testimony of significant witnesses and the identification of another person as the shooter who killed Atlanta police officer Mark MacPhail. Davis insists that he was not at the scene of the crime when the shooting took place and evidence continues to grow asserting Davis' claim. If Davis' attorney is able to convince the Court of the merits of the case and the Court agrees to a hearing, then the stay will extend beyond 25 days. If the Court does not agree to a hearing or if the Court agrees to a hearing but does not rule in Davis' favor, then the State of Georgia once again may seek a death warrant and set a new execution date.
Click on this link to access an article in The New York Times that discusses the latest development in this case in further detail.
Posted by SCC JPIC Blog at 11:02 AM No comments:

The November 2008 organizing packet is available here. Please pray for the SCC's who will be participating this year (November 21-23): Sister Elizabeth, Sister Mary Irene, Sister Janice B., Sister Juliana, and Sister Monica.
Posted by SCC JPIC Blog at 12:56 AM No comments: