News from the SOA Rally

From the SOA Watch: On Saturday, thousands converged at the gates of Ft. Benning, in the annual vigil and rally to close the School of the Americas/WHINSEC. Over the years since 9/11, under the pretext of "terrorism", it has become increasingly more difficult for activists to engage in non-violent civil disobedience, which has been a cornerstone of our movement. Through fences, increased police presence, FBI pre-rally consulation with local police forces, security cameras, searches and in the past, metal detectors at vigil entrances, those who wish to cross the line into the base have been prevented in doing so.This year, some within our movement decided to accompany federal line crossers to their place of crossing at a different entrance. When activists tried to leave the "free speech zone", they were blocked by police and only allowed to leave via the sidewalk. Many were simply leaving to return to their hotels or homes. When the Puppetistas followed the sidewalk towards the intersection of Victory Drive and Ft. Benning Road, the Columbus police moved in to arrest the Puppetistas, and began to arrest anyone, while also targeting various journalists who were filming the repression. One local man was arrested while taking pictures of the unfolding events.Bail was initially set at up to $5,500 per person, with many people being charged with several misdemeanors. This is still hindering a quick release from jail, and was intended to intimidate activists.Today, Sunday, we remembered the martyrs from across Latin America with our traditional solemn funeral procession, chanting "Presente!" after the names of SOA victims, including recent killings and disappearances in Honduras and Mexico.Two more young people joined the growing list of Prisoners of Conscience, risking extended federal prison time and fines. David Omandi of the Los Angeles Catholic Worker and Christopher Spicer of the White Rose Catholic Worker of Chicago took their witness to the School of the Americas, after jumping over the first set of barbed-wire fencing at the entrance to the base, and were immediately detained by military police amidst cheers from supporters.Yesterday, Father Louis Vitale (California) and Nancy Smith (New York) delivered their message of solidarity with our sisters and brothers in Latin America after entering the base from the highway ramp. This is the first time crossing the line for Nancy, Christopher and David, and the fourth time for Fr. Louis. They continue to keep the light of truth alive for the history books, so we can look back and see the flowers that grow from the seeds of resistance we plant today.
Posted by SCC JPIC Blog at 8:47 PM No comments:

Before we come together for a weekend of celebration and solidarity with workshops, speakers, musicians and more, it is important that we remember why we strategically gather at the gates of Fort Benning.

We gather to resist the growing U.S. militarization of the Americas and to affirm the promotion of a culture of peace. We come to insist that the doors of this School of Assassins close and that doors of peace in the Americas open. As we perceive that the SOA has "jumped the gates" and is multiplying in U.S. military bases, troops, ships and fleets in the Americas, we come to say: NO MAS. We come to build bridges with our compatriots of this UNA SOLA AMERICA.

Take a moment to watch this video:

E-mail subscribers, click here to watch the video if you cannot see it in your e-mail.
Posted by SCC JPIC Blog at 7:32 AM No comments: 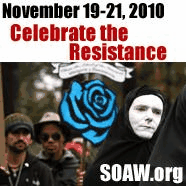 Please remember in your prayers all those who will witness at Fort Benning this weekend.

From http://www.soaw.org/:
The United States government has been training terrorists at a camp in Georgia for years - and is still at it. The Fort Benning based School of the Americas (SOA), renamed in 2001 the “Western Hemisphere Institute for Security Cooperation” (WHINSEC), has been pumping out assassins, dictators and death squad leaders for the dirty work in Latin America since 1946.

For several years, the Sisters of Christian Charity have participated in the Vigil and Non-Violent Protest to close the SOA. This year will be no exception, as Sisters Janice Boyer, Juliana Miska, Maria Teresa Nguyen and Maria Lan Nguyen will represent us at the gates of Fort Benning. Please pray for them and for all who will attend this event.

Posted by SCC JPIC Blog at 7:19 PM No comments: