In preparation for the September visit of Pope Francis to the United States, the Archdiocese of Washington's "Walk with Francis" project invites us to pray, serve and act.  The website (click here) is worth exploring.  No matter what diocese we call "home," the idea of this initiative -- to welcome Pope Francis by transforming our community -- is reflective of the Holy Father's consistent message since the beginning of his papacy.  How will you choose to pray, serve and act to transform your community?
Posted by SCC JPIC Blog at 1:11 PM No comments:

Reading the Encyclical: Being at Peace

We continue to offer our Sunday excerpts of Laudato Si:

225. On the other hand, no one can cultivate a sober and satisfying life without being at peace with him or herself. An adequate understanding of spirituality consists in filling out what we mean by peace, which is much more than the absence of war. Inner peace is closely related to care for ecology and for the common good because, lived out authentically, it is reflected in a balanced lifestyle together with a capacity for wonder which takes us to a deeper understanding of life. Nature is filled with words of love, but how can we listen to them amid constant noise, interminable and nerve-wracking distractions, or the cult of appearances? Many people today sense a profound imbalance which drives them to frenetic activity and makes them feel busy, in a constant hurry which in turn leads them to ride rough-shod over everything around them. This too affects how they treat the environment. An integral ecology includes taking time to recover a serene harmony with creation, reflecting on our lifestyle and our ideals, and contemplating the Creator who lives among us and surrounds us, whose presence “must not be contrived but found, uncovered”.
Posted by SCC JPIC Blog at 1:27 AM No comments:

In addition to our previous summer viewing/reading suggestions, we add one more book, Unforgettable: A Son, a Mother and the Lessons of a Lifetime by Scott Simon.  From the book's description:  "Unforgettable . . . [is] a memoir that is rich, heart-wrenching and exhilarating. . . . Spending their last days together in a hospital's ICU, mother and son reflect on their lifetime's worth of memories, recounting stories laced with humor and exemplifying resilience."

While this book might be considered an atypical "justice and peace" selection, it gives a very moving description of health care for an underserved population in the United States -- the elderly.  It is a great grace that several Sister of Christian Charity lovingly minister among this population.  We are grateful to all of those who provide care not only for our older Sisters, but for the elderly in the neighborhoods where we live and in the places we minister.

Here is a sample of Unforgettable (p. 26), providing an example of what is discussed above:

"My mother was right:  America pastes decals on old people.  They are identified as a demographic group, a market, or a political lobby, but often feel invisible, unheard, and powerless as individuals.  People talk past them, as we do to children.  Their bodies start failing them, fighting them.  To be old in America is to live in a world in which you have to take pills but can't pry open the bottles, and can't open a drugstore pocket comb because it comes encased in a protective packaging fit for the Agra Diamond.  The elderly are accused of slurping up government benefits and medical care in a way that poisons our children's future.  Every marketer and media company wants to suck up what's inside their wallets, but avoid the taint of being identified with the cranky, wrinkly oldsters.  Intricate technologies bark at them from cold screens for passwords they can't (can any of us?) remember, and actions that might as well be commands in an ancient Parthian language.

My mother had come into a hospital for a quick stick in her finger to see if she was sick.  She had planned to have lunch, and dawdle in front of the store windows; she had planned to fly to see her grandchildren the next day.  But instead, she'd been whisked into a ward, jolted, jabbed, and speared without anyone she recognized as a doctor ever really saying why.  And now my mother was being asked, in so many words, if she was ready to give up breathing to get a better view.  Has medical care become so compartmentalized that the first inkling a patient gets that her case is untreatable is when the palliative care team circles the bed?"
Posted by SCC JPIC Blog at 1:22 AM No comments:

Here is another excerpt from Laudato Si.  Keep reading and reflecting!

224. Sobriety and humility were not favourably regarded in the last century. And yet, when there is a general breakdown in the exercise of a certain virtue in personal and social life, it ends up causing a number of imbalances, including environmental ones. That is why it is no longer enough to speak only of the integrity of ecosystems. We have to dare to speak of the integrity of human life, of the need to promote and unify all the great values. Once we lose our humility, and become enthralled with the possibility of limitless mastery over everything, we inevitably end up harming society and the environment. It is not easy to promote this kind of healthy humility or happy sobriety when we consider ourselves autonomous, when we exclude God from our lives or replace him with our own ego, and think that our subjective feelings can define what is right and what is wrong.
Posted by SCC JPIC Blog at 1:22 AM No comments:

Click here to access the July issue of the Stop Trafficking newsletter, highlighting the plight of children and other laborers in mineral mines and some very good news in terms of anti-trafficking advocacy in the business sector in the United States.
Posted by SCC JPIC Blog at 11:09 AM No comments:

The SCC Generalate website has set up a special page to keep track of the Pauline 200 mission.  Click here to access this page, which has updates in German, Spanish and English.
Posted by SCC JPIC Blog at 2:29 PM No comments:

To continue our commitment to reading Laudato Si itself in addition to reading about the encyclical, here is another excerpt:

237. On Sunday, our participation in the Eucharist has special importance. Sunday, like the Jewish Sabbath, is meant to be a day which heals our relationships with God, with ourselves, with others and with the world. Sunday is the day of the Resurrection, the “first day” of the new creation, whose first fruits are the Lord’s risen humanity, the pledge of the final transfiguration of all created reality. It also proclaims “man’s eternal rest in God”. In this way, Christian spirituality incorporates the value of relaxation and festivity. We tend to demean contemplative rest as something unproductive and unnecessary, but this is to do away with the very thing which is most important about work: its meaning. We are called to include in our work a dimension of receptivity and gratuity, which is quite different from mere inactivity. Rather, it is another way of working, which forms part of our very essence. It protects human action from becoming empty activism; it also prevents that unfettered greed and sense of isolation which make us seek personal gain to the detriment of all else. The law of weekly rest forbade work on the seventh day, “so that your ox and your donkey may have rest, and the son of your maidservant, and the stranger, may be refreshed” (Ex 23:12). Rest opens our eyes to the larger picture and gives us renewed sensitivity to the rights of others. And so the day of rest, centred on the Eucharist, sheds it light on the whole week, and motivates us to greater concern for nature and the poor.

Posted by SCC JPIC Blog at 1:38 AM No comments:

Click here to read an article focusing on Laudato Si in the Daily Record (Morris County, NJ).  Erin Lothes, a theology professor at the College of Saint Elizabeth (Convent Station, NJ) is interviewed.
Posted by SCC JPIC Blog at 1:51 AM No comments:

Are you intrigued by the fact that there could be suggestions of musical selections to accompany the recent encyclical?  Read on!

The Archdiocese of Washington has published a study guide for the encyclical, Laudato Si (available here).  One of its suggestions for reflection is:  "Various composers have written musical pictures or poems about nature, such as Beethoven’s Sixth Symphony, Smetana’s The Moldau, and Vivaldi’s Four Seasons. Listen to these works and describe what they say to you. What do you envision as you hear the music?"

On this summer Sunday following a holiday, can we take a few minutes to sit back and hear the music of nature?
Posted by SCC JPIC Blog at 1:28 AM No comments:

This brief video is crafted from prayers of former Presidents of the United States.  Reflecting on the words of  these prayers might be a fitting way to reflect on the meaning of Independence Day.  (Email subscribers, please click here if you do not see a video embedded in your email.)

Please click here to read the blog post from the Consecrated Life of the Diocese of Paterson blog regarding the Sisters of Christian Charity Pauline 200 Mission, which just began. We offer our daily prayers for all the Sisters involved in this mission, especially (from left in photo), Sr. Christina Marie, Sister Maria Lan and Sister Mary Joseph. 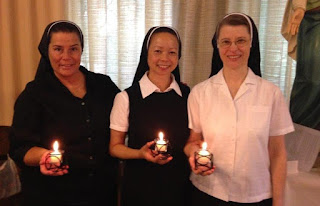 222. Christian spirituality proposes an alternative understanding of the quality of life, and encourages a prophetic and contemplative lifestyle, one capable of deep enjoyment free of the obsession with consumption. We need to take up an ancient lesson, found in different religious traditions and also in the Bible. It is the conviction that “less is more”. A constant flood of new consumer goods can baffle the heart and prevent us from cherishing each thing and each moment. To be serenely present to each reality, however small it may be, opens us to much greater horizons of understanding and personal fulfilment. Christian spirituality proposes a growth marked by moderation and the capacity to be happy with little. It is a return to that simplicity which allows us to stop and appreciate the small things, to be grateful for the opportunities which life affords us, to be spiritually detached from what we possess, and not to succumb to sadness for what we lack. This implies avoiding the dynamic of dominion and the mere accumulation of pleasures.

223. Such sobriety, when lived freely and consciously, is liberating. It is not a lesser life or one lived with less intensity. On the contrary, it is a way of living life to the full. In reality, those who enjoy more and live better each moment are those who have given up dipping here and there, always on the look-out for what they do not have. They experience what it means to appreciate each person and each thing, learning familiarity with the simplest things and how to enjoy them. So they are able to shed unsatisfied needs, reducing their obsessiveness and weariness. Even living on little, they can live a lot, above all when they cultivate other pleasures and find satisfaction in fraternal encounters, in service, in developing their gifts, in music and art, in contact with nature, in prayer. Happiness means knowing how to limit some needs which only diminish us, and being open to the many different possibilities which life can offer.
Posted by SCC JPIC Blog at 7:30 AM No comments: