Liturgical Press is sharing an "Advent Calendar for Adults," with excerpts from 2011: A Book of Grace-Filled Days, copyright 2010 by Margaret Silf. Click here to be directed to these short, challenging excerpts.
Posted by SCC JPIC Blog at 11:01 PM No comments:

Thirty years ago, four women were murdered by military death squads in 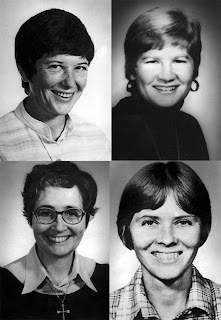 El Salvador. Their names were Ita Ford, Jean Donovan, Maura Clarke, and Dorothy Kazel. Why were they such a threat? Because they worked with the poor. They were beaten, raped, and murdered for this "crime." How far have we come during the 30 years since these murders? Those of us who can remember the time after the murders occurred will recall the attempts to paint these women in a different light, indicating that in some way they were responsible for their murders. We will remember the Carter administration's attempts to halt aid to El Salvador and the pressures President Carter endured because of that. We will remember the Reagan administration's favorable treatment of the Salvadoran military regime. We may remember how those who were critical of President Reagan's favor toward the Salvadoran government were treated. More recently, we remember how the protestors of the SOA at Fort Benning were treated just last month -- arrests of those who took photos, those who were walking to their cars, and those who were well within the designated protest zone (as well as those who partipated in civil disobedience). How far have we come during the 30 years since these murders? We remember how far we still have to go!
Posted by SCC JPIC Blog at 7:23 AM No comments:

What are you doing for Advent?

Thanks to Sister DeSales for sharing the following thought-provoking video from adventconspiracy.org.

E-mail subscribers, click here to watch. Go to adventconspiracy.org for more information.
Posted by SCC JPIC Blog at 8:27 AM No comments: