As many of you know, the flooding from Hurricane Irene is being felt keenly in several places where SCCs minister. As we hear of efforts to help victims of flooding, we'll post them here. Would you like to add a relief effort? Just click on "Comments" at the bottom of this post. (Email subscribers click here to get to the blog.)

Here's one: The Township of Denville asks if you wish to provide assistance to flood victims, please consider clothing gift cards, which are desperately needed. Gift cards may be dropped off at the Social Services Department at Town Hall, 1 St. Mary's Place, Denville, 8 am - 4 pm, Monday to Friday.

Posted by SCC JPIC Blog at 5:57 PM No comments:

The 2011 Labor Day Statement from the USCCB -- "Human Costs and Moral Challenges of A Broken Economy" -- is available here as a pdf. Inspired by the 120th anniversary of Rerum Novarum, Bishop Stephen Blaire of Stockton, CA, presents the challenges of work and workers today.

Peace Be With You 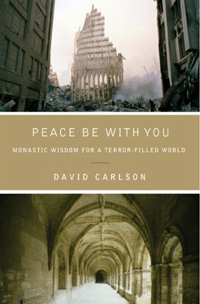 The America Catholic Book Club selection for August is Peace Be With You: Monastic Wisdom for a Terror-Filled World by David Carlson. As the 10th anniversary of "9/11" approaches, this is a timely read. Here's the blurb from America: Published in time for the 10th anniversary observances of the Sept. 11, 2001 terrorist attacks at the World Trade Center, Pennsylvania and the Pentagon, this book shows the common ground and quest for peace shared by Christians and Muslims in America. Based on 30 interviews with abbots, nuns and monks, its goal is to proffer hope and trust to a weary, sometimes hate-filled and mistrusting world. Carlson chose monastic interviewees because “their training would give [us] a different angle of perception on our suffering.” In a forthcoming review for America, Bill Williams calls the book “a compelling examination of America’s angry response to 9/11” and [the] “radical alternative that would have involved compassion, understanding, deep listening and forgiveness.

Posted by SCC JPIC Blog at 5:21 AM No comments:

If you tried to contact Wyndham using the e-mail address in yesterday's post, it was incorrect. Many apologies for that! Here is the correct e-mail to use: alyson.johnson@wyndhamworldwide.com
(I also corrected yesterday's post, so if you look at it and see that it is the same as above, you are correct.)

Posted by SCC JPIC Blog at 4:36 PM No comments:

Say "Thank You" to Wyndham Hotels

You may recall the anti-trafficking efforts in which we have been involved (especially during the World Cup) to encourage hotels to sign the Code of Conduct for the Protection of Children. Sparked by over 14,000 letters from change.org members, Wyndham (the parent company of Travelodge and Howard Johnson) has become the third major hotel chain to sign the Code (along with Carlson Companies and Hilton World Wide). In this video excerpt from CNN, Jim Clancy interviews Mary Falvey from Wyndham Hotels on their commitment to protect children from sex trafficking. (E-mail subscribers, click here to see the video if you do not see it below.) Thank you to Wyndham Hotels for working with ECPAT-USA in this important endeavor. As you might have read in the August issue of Stop Trafficking, we are being asked to write to the Wyndham CEO, Stephen P. Holmes, to thank him for signing the Code. The contact information is: Alyson R. Johnson, VP of Corporate Communications, Wyndham Worldwide, 22 Sylvan Way, Parsippany, NJ 07054, phone: (973) 753-6759, or e-mail Ms. Johnson at alyson.johnson@wyndhamworldwide.com

To those residing in Pennsylvania:

We wanted to share the following “Action Alert” with you. (It applies to more than PA residents, but the link we're providing is a link for PA residents.)

The recent “preventive services” mandate from the federal Department of Health and Human Services (HHS) would require health plans to cover female surgical sterilization and all drugs and devices approved by the FDA as contraceptives, including drugs which can kill an unborn child before and after implantation in the mother’s womb. Under the mandate, employers will have to pay for contraceptives and drugs that can cause abortions, even if it violates their deeply and dearly held moral and religious convictions.

The rule allows an exemption for “religious employers,” but this definition is quite narrow and would exclude most Catholic social service agencies and healthcare providers. Religious exemption would only apply to an employer that “1) has the inculcation of religious values as its purpose; (2) primarily employs persons who share its religious tenets; (3) primarily serves persons who share its religious tenets; and (4) is a non-profit organization…”

We hope that you can see how this definition of “religious employer” is a dangerous one in terms of allowing for religious exemptions. Clearly, Catholic social service agencies and hospitals do not fulfill items 1 through 3 of the definition above.

All concerned citizens are invited to visit, call, fax, or e-mail their members of Congress urging them to co-sponsor and support the Respect for Rights of Conscience Act – H.R. 1179 (House Bill) or S. 1467 (Senate Bill).

Click on this link http://www.votervoice.net/core.aspx?aid=718&issueid=25994&siteid=0&app=GAC&ftfrecipientemail=&isvisited=true to be directed to the site of the Pennsylvania Catholic Conference, where you can e-mail your Representatives and Senators. Scroll down to the bottom of the page to click on “Take Action.” Please share this link with others you know in Pennsylvania.

Posted by SCC JPIC Blog at 9:14 PM No comments:

Last week, we asked you to contact your representatives to encourage them to sign on to the letter that will be sent to President Obama to ask him to close the SOA. The letter, with 69 signatures of representatives, will be given to the President on August 16. The letter will have the most impact if it is accompanied by calls from around the country telling the President to "Shut it down!" So, call the White House on Tuesday, August 16 and let him know that you support the closure and investigation of SOA/WHINSEC. Click here for instructions and a possible script. Share this information with your friends throughout the country.

Posted by SCC JPIC Blog at 9:41 AM No comments:

The story: In a grim summer, the story of a 9-year-old girl who teaches us adults about maturity truly renews our faith in humanity. Click here to read Kristof's amazing and touching story of Rachel Beckwith. In life and in death, Rachel has a message.

Posted by SCC JPIC Blog at 9:32 PM No comments:

China's Ministry of Public Security said that the police rescued 81 children from a major child trafficking ring that had operated throughout eastern China. Click here to read the NYT story.
Posted by SCC JPIC Blog at 9:02 PM No comments:

Notify your Representative: Close the SOA!

The deadline has been extended to August 10 to contact your representative and urge him or her to support human rights by signing on to a letter urging President Obama to issue an Executive Order to close the SOA (now known as WHINSEC). Rep. Jim McGovern has introduced this congressional sign-on letter. Now he needs your help to urge your representative to sign it! Phone calls are best, but e-mails are accepted, too. Click here to go to the SOAW site to take action. The phone number and e-mail contact can be found there. Share this information with as many friends as possible.

As you may know, the School of the Americas (SOA) is a combat training school for Latin American soldiers, located at Fort Benning, GA. In 2001, it was renamed the Western Hemisphere Institute for Security Cooperation (WHINSEC). No matter what you call it, the facts remain: since 1946, the SOA has trained over 64,000 Latin American soldiers in coutnerinsurgency techniques, sniper training, psychological warfare, military intelligence, and interrogation tactics. These graduates have consistently used their skills to wage a war against their own people. Among those targeted by SOA graduates are educators, union organizers, religious workers, student leaders, and others who work for the rights of the poor. Hundreds of thousands of Latin Americans have been tortured, raped, assassinated, “disappeared,” massacred, and forced into refuge by those trained at the School of Assassins.
Posted by SCC JPIC Blog at 6:15 AM No comments: