For your June Calendar

Here are some dates you might want to remember during June:

On the Call to Holiness in Today's World

In April, we introduced  Gaudete et Exsultate, the Holy Father's Apostolic Exhortation "On the Call to Holiness in Today's World."  Today, we will begin to share excerpts of the letter, whose goal is to "repropose the call to holiness in a practical way for our own time, with all its risks, challenges and opportunities" (n. 2).

"'A great cloud of witnesses' (Hebrews 12:1) impels us to advance constantly towards the goal.  These witnesses may include our own mothers, grandmothers or other loved ones (cf. 2 Tim 1:5).  Their lives may not always have been perfect, yet even amid their faults and failings they kept moving forward and proved pleasing to the Lord" (n. 3)

"The saints in God's presence preserve their bonds of love and communion with us. . . . Each of us can say: 'Surrounded, led and guided by the friends of God . . . I do not have to carry alone what, in truth, I could never carry alone.  All the saints of God are there to protect me, to sustain me and to carry me'" (n. 4, quoting Pope Benedict XVI).

As the founder of St. Anthony's Center and St. Anthony's Clinic in Williamsport, Sister Henry dedicated so much of her life to serving the "least" of our brothers and sisters.  She was known for her charitable works throughout Lycoming County, PA and beyond.  The picture below is taken from a very large mural in Williamsport, "Inspiration Lycoming," by Michael Pilato.  In the mural, Sister Henry is depicted cooking for the hungry she served every day for over 40 years. 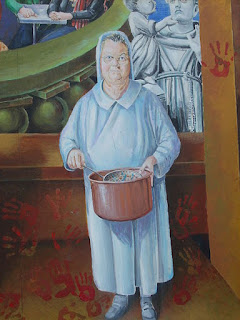 The May issue of Stop Trafficking is available here.  This issue highlights how vulnerability among children leads to exploitation and sex trafficking.
Posted by SCC JPIC Blog at 1:39 PM No comments: